Quick as a flash! 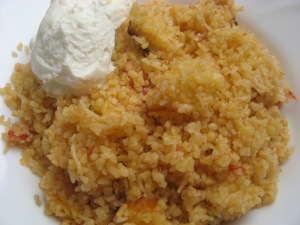 A great standby dinner in our family, when it feels as though there’s nothing in the fridge, is my bulgar wheat and halloumi pilaf. It takes next to no time to make and it’s nourishing, tasty and filling. The addition of halloumi is a Cypriot thing which makes the pilaf highly savoury and delicious. Here’s the recipe:

1 small, finely chopped onion
about 2 tbsp olive oil
a small handful of vermicelli, broken up (I buy this in packets from Greek grocers)
about 4 tbsp chopped tomatoes
1 stock cube (either chicken or vegetable)
2 cups of bulgar wheat (If you can get one that is course cut, even better)
4 cups of boiling water
about half a block of halloumi cut into small cubes.

First of all heat the oil in a wide bottomed pan that has a lid.
Fry the halloumi until it is lightly browned, then add the onion and after that has also browned slightly add the vermicelli.
Fry together for a couple of minutes taking care not to burn the vermicelli which browns very easily.
Stir in the chopped tomatoes, the stock cube, the bulgar wheat and finally the water.
Turn the heat to low, cover the pan and simmer for about 10-15 minutes until the water has evaporated and the bulgar is cooked.
Stand the pan, undisturbed to one side for about 10 minutes.
Serve with thick Greek, set yoghurt. I like the ‘Total’ brand. Or Fage if you can find that.

a super quick sweet to finish the meal is Nigella’s chocolate croissants from ‘Express’. You can hardly call this a recipe – just bought puff pastry, chocolate, shaped, brushed with beaten egg and baked for 15 minutes. Super quick and super tasty! 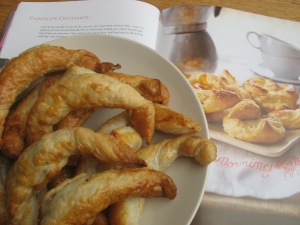