Nigel Slater and Nigella Lawson. Two of my favourite food writers, and also creators of these two fine recipes.
I’ve lost count of the amount of times I’ve made Nigel’s pasta with spicy sausage. It’s warming, filling, tasty, spicy…in fact it ticks all the yummylicious boxes in my book!
I think Nigel must like the recipe too, because he’s got it in both ‘Real cooking’ and ‘Real food’, both of which are amazing books.
Here are the basic ingredients: 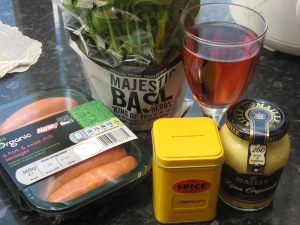 also incuded in the recipe are pasta and double cream. I couldn’t find orrechiette today in Waitrose, so settled for little shell-like shapes called ‘gnocchi’. I’ve used these before with good results.
Here’s the pasta ‘sauce’ – sausages, wine, basil, mustard, chilli flakes and cream before it’s added to the cooked pasta: 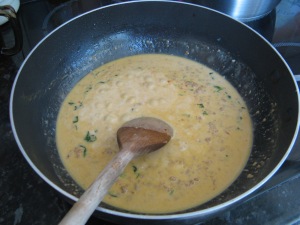 and here’s the finished dish: 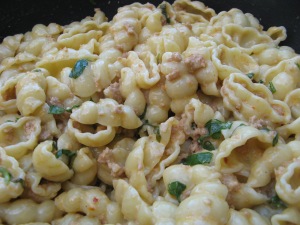 My sister-in-law and her daughter are arriving later to stay until next Monday, it’s a long story, one I’ll save for another time, so I thought I’d make some quick muffins to have something home-made and delicious to offer them. I chose Nigella’s pear and ginger muffins, which quickly morphed into apple and cinnamon muffins when I realised there were no pears in the fruit bowl! 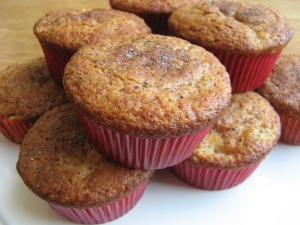 The smell of apples and cinnamon filling the kitchen is quite delicious! And here’s the recipe in case you want to try them.

8 comments on “Nigel and Nigella”