A family get-together complete with ‘Galaktoboureko’

Sunday was a beautiful day, warm, sunny, just perfect for a family get-together, and what better reason than my Mum’s 62nd birthday. It was such a gorgeous day we called her up to set up the table under the gazebo outside. My Dad loves his garden, he works very hard, long hours, in the family business and therefore doesn’t really get much time to enjoy it, but he always seems at his most peaceful pottering amongst his flowers. His pride and joy being his fig tree which has small fruit growing on it at this time of year. He’s also very proud of his wisteria, which have flowered for the first time ever this year.

Here’s my Dad with my daughter Elena and niece Ellie – both little girls were called after my Mother, a Cypriot tradition which reminds me of the film ‘My big fat Greek wedding’, you know the bit where the father introduces his large family to the new in-laws and everyone’s called Nick or Nicky? Well my family’s a bit like that! 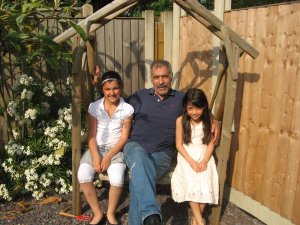 Anyway, back to the party, I’ve digressed. How can we have a Greek get together without huge spits of barbecued lamb? The smell was amazing! Mom also made Cypriot ‘sausages’ wrapped in caul called ‘seftalies’,tandoori chicken which we barbecued, pork souvlaki, salads including potato salads, homemade humous…..
My contribution was homemade galaktoboureko, which translates as ‘milk pie’, basically I made a thick custard using semolina, cornflour, sugar, eggs and milk. I left the custard to set overnight after putting it into a rectangular dish. On the Sunday morning I cut the custard up into pieces, and folded it up like a little parcel in oiled filo pastry. I used two sheets of filo as for some reason the brand I bought had tiny sheets.
The little custard parcels are baked in the oven until golden, and then dunked in a sugar syrup to which I had added cinnamon, cloves, the juice of half a lemon and a few drops of rose water. 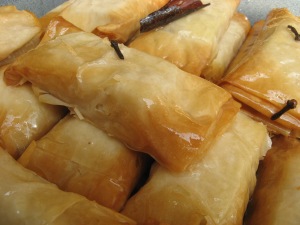 The result is splendidly syrupy with a custardy, creamy interior.
We had a lovely day with lovely food surrounded by my nearest and dearest. What more could I ask for?
Of course, the day after we had loads of barbecued meat left over, and a little trick I got off my MIL is to take the meat and put it in the oven with rice, tomatoes, a chopped onion, cinnamon, salt and pepper to cook. The result is a delicious rice pilaf which takes on the smoky flavour of the barbecued meat – delicious!

13 comments on “A family get-together complete with ‘Galaktoboureko’”