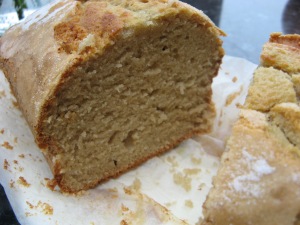 What better use for the rosemary that Lorraine sent to me but to make the rosemary remembrance cake from ‘Feast’ in honour of her.
I think it was Maria from the Goddess’s kitchen that had the good idea for Pistachio’s friends to cook something in remembrance of her.
Me being me though, I had to find an extra shortcut in the recipe and also for ways of lightening the recipe up. Something stops me nowadays from using almost a whole packet of butter in 1 cake! I’m sorry.
So here’s the lightened up/lazy persons way of making this cake, still unbelievably tasty and extraordinarily moist:

So, instead of going the long route and peeling, chopping and coring the apple and then simmering it in a pan until soft, I took the lazy route and used ready made apple puree instead.
Everything is mixed in with the apple in the processor, then placed into a lined loaf tin 170 deg. C for approximately 50 mins.

The cake was only very subtly rosemary infused which I was really pleased about. I’m glad I didn’t simmer the apple with a sprig of rosemary, I think that would have sent it over the top into rosemariness!

Here’s to you Pi.
I never dreamt for a second that you’d be the reason I’d be making this cake.

12 comments on “Remembrance cake for Pi.”