A very long time ago, in my dim, distant past, an eighteen year old English- Cypriot girl met and got engaged to a Cypriot boy all in the space of a month (Yes, in those days that’s how things were done!) and along with so many new experiences and new family members to get used to, went to live with him in his home in Larnaca. While helping my new sister-in-law to cook one day, she asked me ‘Do you know how to cook?’.
Paralysed by fear and nerves, I somehow managed to whisper an embarrassed ‘no’, when the truth was I had some knowledge, because I’d enjoyed cooking with my mom at home in England and had picked up some of the basics of Cypriot cooking as I did so. But rather than risk more of her questioning I’d denied all knowledge, because it was easier for me.

But anyhow, I came back from Cyprus armed with my new little Cyprus cookbooks as well as a new fiancé! Determined to learn how to cook Cypriot food as good as, if not better than some, Cypriot housewives.
These little books are great, published in the early 80’s, they cover any Cypriot dish you can think of! And it was from these books that I got the recipe for goubes from.
I’ve made them quite a few times over the years, but they are definitely a labour of love! Time consuming and fiddly – one’s worth as a Greek housewife is measured by how thin one can make the bulgar wheat casing.

Goubes/kibbe/kubbeh/koubes are basically bulgar wheat ‘shells’ filled with a minced meat and onion filling and then deep fried. There are many variations from the Middle-East and around that area, some baked, some fried, some layered in a tray and baked, much like the disastrous Nadia Sawalha’s kibbe which I blogged about previously.

1. Add the water to the bulgar wheat and simmer for 5-10 mins until the water has been absorbed, add 1 tsp of the salt and set aside.

2. Fry the onions in a little oil until softened, add the mince and fry until browned, there should be no trace of pinkness left. Add the other teaspoon of salt, pepper, the parsley and cinnamon. 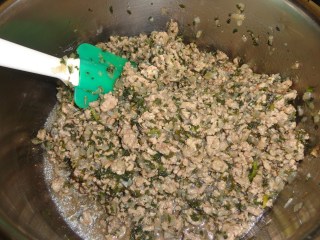 3. When the bulgar wheat has cooled down knead it well until it becomes a cohesive mixture, almost like a bulgar dough.

Now take egg sized lumps of the bulgar and insert one finger while building it up into a well (it should look like an elongated egg, with a cavity running from one side, almost to the other (Oh, dear, I hope I’m explaining this ok)
Now fill the cavity with about a tablespoon of the mince meat, then close the cavity, while shaping the ‘egg’ so that it is as elongated as you can get it, bearing in mind that the bulgar wheat casing should be as thin as you can get it.

Do you want to be known as a good Greek housewife? Then it needs to be THIN!

You should now have an elongated-egg shaped bulgar wheat shell, filled with mincemeat.

4. I dread to think of the gossiping that will ensue….
my goubes are neither thin walled, nor elongated……..sigh…….. 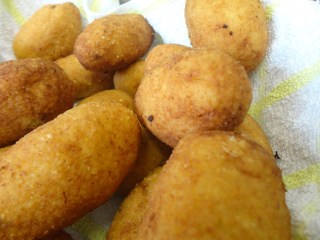 Then sit back and bask in the glory.

Or not, as the case may be.