…and both are true.

Of course then we needed side dishes to go with our delicious hunks of meat. So we had:

Made by my 12 year old daughter, more of an assembly job than a recipe, it consists simply of small, peeled prawns, about 10-12 shredded ocean sticks (Also called crab sticks or surimi) mixed together with seafood sauce or Thousand Island dressing, piled on top of fresh, crisp, shredded lettuce leaves.
Of course you can make your own sauce, but we didn’t this time.

Also known as raita, or cucumber and yoghurt dip.
Also made by my daughter – mix 1 large tub of yoghurt, with half a large, grated (on the side with the large holes on the grater) cucumber. Make sure you squeeze as much of the water out of the shredded cucumber as you can, so that the finished tsatziki is not watery-  2 cloves of peeled and crushed garlic, dried mint (about a teaspoon) and salt to taste.

I made-up a couscous recipe, which I’ve called 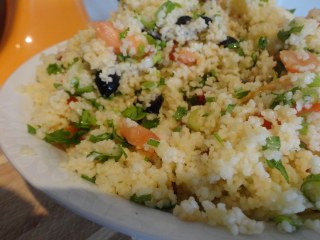 Soak 250g (half a packet) of couscous in enough boiling water to cover it by about an inch, add a little salt and some Marigold stock cube powder, or similar. Leave the couscous for about 10 minutes to absorb the stock.
you can chop the rest of the ingredients while you’re waiting.

Now mix these into the couscous and drizzle a little of the oil that the tomatoes are packed in over it.
Colourful and summery.

And last but not least:


– nice and easy, because it’s all simply whizzed up in the processor.

1 tin of chickpeas (400g)
2 cloves of garlic
2 tbsp of tahini
2 tbsp yoghurt
juice of 1 lemon, or according to taste
salt. 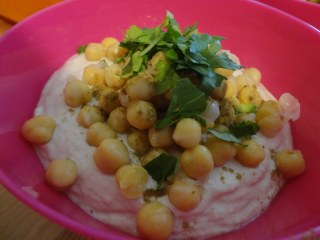 Whizz it all up in the blender, place it in a suitable bowl…..I know, I know……mine is pink plastic….but it’s pretty!
Decorate with fresh parsley, a pinch of ground cumin and some reserved chickpeas.