These two Cypriot dishes came about being made together to form our Evening meal, by a rather fortuitous trip round my favourite ‘Waitrose’ today. I love Waitrose!

Love just spending as long as I want going up and down the aisles, having a good mooch at all the products…today I found pearled spelt, farro and wholewheat couscous amongst other goodies, largely due to my obsession with Megan Gordon’s great book ~ ‘whole-Grain Mornings’. 🙂

And everything is so much nicer when the sun shines, isn’t it? Makes you happy just to be!

The okra was just sitting waiting for me on the reduced rack.  Yay! 😀

Now, I know okra’s a bit like marmite. Love or Hate. No in between camp! And it can be a little gloopy, especially when simmered in a stew, but here we want to embrace the okra’s ability to somehow magically ‘thicken’ the sauce, all on it’s lonesome.

But first let’s make the Cypriot stuffed peppers together shall we? A lovely, filling family meal.

I use the same filling that I use in my stuffed vine leaves, just so you know 🙂

first we need 6 beautiful, colourful peppers, with the tops and seeds removed. 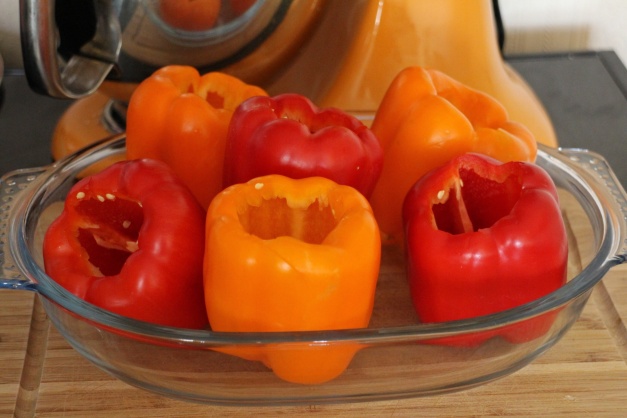 place the minced pork in a large bowl and to it add 1 cup of long grain rice:

Add 1, 400g tin of chopped tomatoes to the browned onions and simmer together for a few minutes:

Until the tomatoes have become nice and thick: 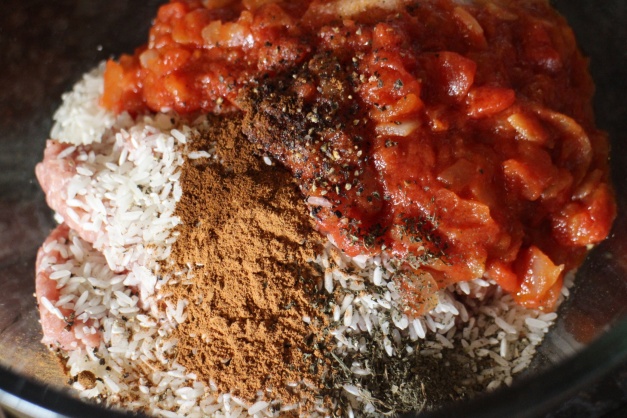 Use this mixture to  stuff the peppers. Any remaining mixture can simply be placed in the same pan as the peppers, to the side.

Use a pan which will give you a snug fit, I used my glass Pyrex oval dish, the one I use for the ‘One hour Cinnamon rolls’ 😀

Pour about 400g Passata over the peppers (or another 400g tin of chopped tomatoes) pour boiling water into the pan, until it comes half-way up the peppers, into the peppers too, this will help with the rice cooking.

Cover with foil and cook at 180 deg C (160 deg C Fan oven) for about 1hr 10 minutes. Uncover for the last half an hour or so, to allow the peppers to brown and burnish. You may need to turn up the temperature towards the end if the peppers haven’t browned.

I know it looks as though the peppers are swimming in liquid, but the rice continues sucking this up even after they’ve finished cooking, I had hardly any liquid left by the time the family ate.

Okra Yiahni –
A true Cypriot peasant dish, great for a meat-free day, you can add potatoes to this dish which have been cut into 1 inch cubes and fried until golden.

Start off in the same way as the stuffed peppers, by frying 2 chopped onions in a little oil until golden brown.

Top and tail the okra:

Add 1, 400g tin of chopped tomatoes to the browned onions. Simmer for a few minutes, before adding the okra (and potatoes if you are using them, though I didn’t on this occasion)
one and a half cups of water, salt and pepper to taste.

Bring to a boil, turn heat to low, cover with a lid and simmer for about 20 minutes until the okra (and potatoes)are tender (test with a fork)

Add about 1 tbsp of lemon juice or vinegar to counteract the richness of the dish.

Serve with the stuffed peppers. Oh, and lots of lovely, crusty bread. 😀 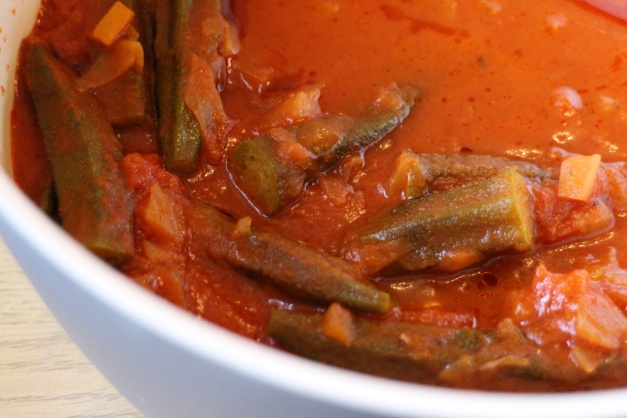 Before I go, my lovelies, do check out these two blogs – my friends Eleanor and Georgina have recently started their blogs up again after time away…

Eleanor’s blog – Flowers in The Kitchen