I love these. And I hadn’t made any for the longest time…..:-D

But, reader, it’s an irrefutable fact….

I cannot be trusted with 12 of them.

So, I halved the recipe. Clever, huh?

I have a teensy weensy little problem with their name though. To me, they are not puffs.
No. Puffs conjure up airy fairy little morsels, but these are altogether sturdier – butter, cinnamon and sugar topped little cakes.
But, what’s in a name…don’t let that put you off! No….you will love them! 😀


Adapted from the hefty tome that is the ‘King Arthur Flour Baker’s Companion’.

1. In a mixing bowl, whisk together the flour, sugar, baking powder, nutmeg and salt. Make a well in the centre,

2. In a jug beat egg lightly, then add milk and melted butter. Add to well.

3. Stir until just mixed in (Batter may be lumpy)

4. Lightly grease muffin cups, or use paper liners (Or silicone as I did) Fill three-quarters full.

6. For the topping, whilst muffins are baking, combine sugar and cinnamon in a small, shallow bowl until blended.

7. When muffins come out of the oven, let them cool enough so that you don’t burn your fingers as you pick them up, dip the tops well in the melted butter, then into the cinnamon sugar mixture. 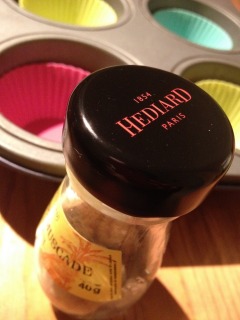 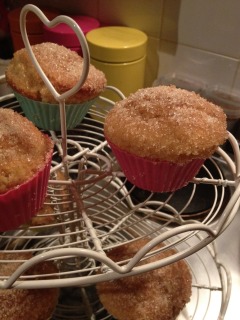 I don’t know if you know this fact about me….

American recipes in general, but American South recipes in particular.

Ergo, I love the ebullient, effusive Paula Deen, who, to me is the shining beacon of this form of cooking. I like her generous ways, her love of butter and cream and sugar and I just like to watch her and listen to her Southern drawl y’all…… 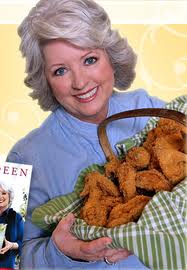 So, of course, when I saw that Ms. Deen had a Southern cooking bible due to be published, I put it on pre-order months back. And can I say – it’s fantastic!
It’s comprehensive, detailed, interesting, with page after page of recipes that I’m dying to try!

Here’s the first one:

It’s a kind of sweet, creamy, nutty, deluxe bread and butter pudding, the praline topping really takes this gorgeous dessert into another league.

1. Grease a 13×9 inch baking dish with butter (I left this step out and used a large, round ceramic deep pie dish instead)

2. Cut the bread into thick slices, place in dish overlapping. (I used small brioche rolls, about 10 of them)

3. In a large bowl combine the eggs (I only used three because I don’t like things too ‘eggy’) cream, milk, sugar, vanilla, cinnamon, nutmeg and salt. Beat with a whisk until blended, pour over the bread slices, cover with foil and refrigerate overnight (I didn’t do this as I didn’t have time, I don’t think it mattered as I used brioche, not crusty French bread)

5. Prepare the praline topping by mixing the butter, brown sugar, pecans, corn (or golden) syrup, cinnamon and nutmeg and blend well. Spread topping over bread slices, bake until puffed and golden, about 45 minutes.

After this resounding sweet success I think I love Paula Deen even more.

Whoopie Pies. Yet another first attempt. 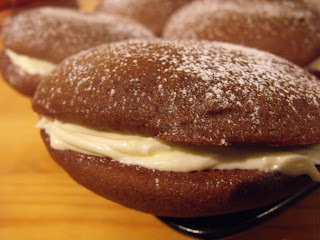 I decided to have a go at making whoopie pies (replacing the cupcake in popularity, don’t ya know!) in a rather circuitous way, it was late yesterday afternoon, when I remembered that I had some of the deliciously tangy cream cheese frosting left over from making cinnamon rolls a couple of days ago.
What could I do with it? Use it to top some cupcakes? Naaaaw, yawn, I think I’ve overdone the cupcakes lately, need to ‘miss them badly’ before I make them again.
Use it as a filling in carrot cake? Naaaaw, I love carrot cake, but for some reason the rest of the family (except for hubby) don’t. So that was out.
Then, while looking through my new Hummingbird ‘cake days’ book, I came across a recipe for chocolate whoopie pies.

But. And this is a big BUT.

Son No. 2 had borrowed my kitchen scales. (Long story)

I knew then that I’d have to find an American recipe. So….

Google to the rescue as always. Where I found this great recipe on the:

I had a slight problem with the sizing of the pies…I should have ended up with about 15 pies, but I only got 7 out of the mixture. They were HUGE!! The size of side plates. And I’m not even joking!
So next time I’ll either have to purchase whoopie pie tins or pipe them onto drawn out circles on baking parchment.

Would I make them again?   Oh, yes, I’ll definitely give them another go!

Would I do anything differently?  The sizing needs sorting out, my fault. I was measuring them in a quarter cup measure. Far too big.

I love food. I love my family. I love photography. I think Ree
Drummond and I have a lot in common, OK, I didn’t marry a cowboy or
live on a ranch, but we both have four children, two boys and two
girls. We both take random photographs of objects we consider
beautiful…as I say, we have things in common!
This book came today and I just can’t put it down! Those who know me
will also know that I have a ‘thing’ for American recipes, and what
could be nicer than to have recipes for such homely goodies as
cinnamon rolls, enchiladas, sour cream pancakes, spicy pulled pork,
all mixed up with tales of her ‘marlboro man’ husband, stunning
photographs of the ranch, the children and all the animals!
This book has gotten me so enthused I want to emigrate to Oklahoma and
live on a cattle ranch (well maybe not, but you get the picture!) the
layout is clear and colourful with lots of step-by-step photographs.
Check out the Pioneer womans website. It’s great! I love her writing.
It’s enchanting! I’m thinking of dying my hair red – but that would be
plain old stalky right? ;-))

I am obsessed by American cookbooks and American food. I can only imagine how happy I would be let loose in an American supermarket. Others are happy buying designer goods – but no, just let me spend the day scouring the shelves of the American equivalent of Waitrose (Is there one??) and I’d be as happy as a pig in muck!
There must be other American food addicts because I’ve found that I can get many of the food items I’ve read about off Ebay! Here’s a pic of my order – I’ll list each item and tell you why I ordered it.

1. Nilla wafers – Not like the wafers we get here in the UK, but rather small,plain vanilla scented round biscuits. I’m glad I ordered these, because now I know that I can find a substitution over here rather easily. I’m planning on making a Southern American banana pudding, after reading about it in countless of my American recipe books.

2.Reeses peanut butter cups – but a new caramel version. I only ordered one packet of these, I’m much too dangerous to be left around more than that! Lisa got me addicted to these after sending some to me in the original swap box.

4. Nestle chips in butterscotch and the funky peanut butter and chocolate stripy ones that Nigella uses in ‘Express’ – We just can’t get cool chips like these in our supermarkets, only chocolate ones – milk, dark or white…

5.Motts applesauce (unsweetened) – I have seen this ingredient in so many muffin recipes I can’t tell you. As far as I know we can’t get unsweetened apple sauce over here, only sweetened. Just for your information, I’ve seen a huge jar of apple sauce in Tesco. But it’s sweetened.

6.Liptons onion soup mix – Used as a flavouring in many of my most trashy American cook books! Just looked and it contains MSG…hmmmm.

7. Redbush caramel tea – I saw this just the other night on ‘Market Kitchen’, and thought it sounded really interesting. I’m hoping that simply by having a cup of caramel tea that I won’t want that HUGE bar of chocolate or slice of cake…I’ll let you know… 🙂